There has been much media coverage in recent times debating whether surgery should be performed to release tongue ties in infants. As is often the case with modern media, especially in this digital age of click bait and “fake news”, the angle these stories have taken has largely been sensationalist and negative. In a procedure carried out on tens of thousands of infants all over the world, finding a story where things didn’t go as well as a desperate mother hoped are not difficult to find.

Nevertheless, the great irony is that these stories which cherry pick individual negative stories from amongst thousands of positive outcomes, invariably include some important sounding doctor or professor who states in stern tones “there is no evidence to support the surgical release of a tongue tie.”

This commentary finds its way into medical and dental schools, and doctors and dentists receive a mantra that tongue tie surgery is “fringe” medicine, unsupported by science and only “cowboys” would undertake such a “barbaric” procedure. Not wanting to attract the disapproval of their peers, or even wishing to advertise their objective scientific virtue, these acolytes of the conservative status quo, repeat the thunderous mantra, “there is NO EVIDENCE…”

If we look a little more closely into these claims, we’ll see that for most doctors and dentists who make this claim, it is actually the third category. There is actually quite a lot of evidence that surgical treatment of tongue ties does help breastfeeding, and there is plenty of evidence that shows that breastfeeding, especially when extended beyond 6 months of age, has a host of positive health effects not the least of which is better jaw growth and tooth position (something that is of critical interest to any preventive dentist). In fact Dr Bobby Ghaheri, an Ear, Nose & Throat Surgeon in the United States who has both treated and published research on tongue ties wrote a blog post a few years ago exploring some of the research, and there have been a number of further studies since. You can see for yourself some of the research on which we base our protocols at Enhance Dentistry in our scientific reference list.

So why the debate?

Well first and foremost it’s important to understand that there is a hierarchy of scientific evidence. Not all evidence is as valuable as others. Some types of studies are more prone to the introduction of bias and some study designs are not as readily able to be generalized across a population. 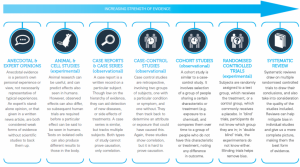 So, when conservative medical commentators say “NO EVIDENCE” what they are actually saying is, few studies have been completed at the highest level of the hierarchy meaning that a meta-analysis (where the results of many studies are considered together) is difficult or not overly conclusive. But if you can’t be bothered explaining things, perhaps it’s easier to just say “NO EVIDENCE”.

There is a pretty significant problem with this approach to the debate though. Firstly, the evidence hierarchy exists for a reason. Sometimes the highest level of evidence is just too black and white for the subtleties and complexities of human health and multifactorial interactions. Randomised Control Trials (RCTs) are really good at telling you whether something works or not, but they’re not great at telling you why, or whether another approach might work better, or indeed whether a combination of approaches might work best of all.

It’s also important to understand that for some resear 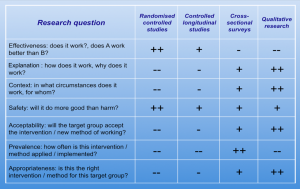 ch questions, we wouldn’t accept anything else other than a distinct yes or no answer, while in others we would be quite happy with “depends”.

For example, take much of the research done in the pharmaceutical industry. The history of the development of drugs is littered with examples of companies being sued and patients being irreparably harmed, even killed, because of a drug that did not perform as intended. Given the very high risks of severe adverse reactions to drugs, it is vital they are extensively tested and studied before being approved for use. Even if the risks are not severe, there may be significant side effects that outweigh any benefit the drug delivers. In such circumstances several double-blind randomized control trial studies are usually required before a drug will be approved for use – and even that process can be distorted for commercial gain.

So we can see from this example that when the risks are high, the benefits must be sufficiently high to justify taking the risk.  Naturally we seek a great deal of certainty about just how risky it might be to take a particular medication. That is, we require a high level of evidence to show that the benefits outweigh the risks, which is why RCTs are common in the pharmaceutical industry.  For drugs, it is relatively easy to set up a control group that is taking a placebo pill, where neither the researchers nor the subjects know who is taking the drug or the placebo (double-blind).

You can see for yourself how you personally might approach this balancing of risk and reward and the necessity for greater evidence as risk increases.

Imagine I was to offer you $100 to take a running jump and leap over a ditch that is 1 metre wide and 30 centimetres deep. The reward is moderate, but the risk is low. At worst you may injure an ankle if you didn’t make the jump. You are likely to be more inclined to make the jump if you see ten people before you successfully make the jump and pocket the cash.

But what if the gap was 2 metres wide and the drop was ten metres deep? Would you take the same risk for $100? Many people would say NO! But what if I offered you $1,000,000 to take the leap? Now perhaps a few more people would say yes, the reward starts to outweigh the risk, especially if they get to see a few people making the jump successfully.

However, what about 3 metres wide, 100 metres deep and $10,000,000? Now you might want to have some pretty solid evidence that you personally could make the jump. You might want to practice. You might want to know whether all of those people you’d been watching previously were in fact part of the national long jump team! The risk is very high, and so is the reward, but you want some really firm evidence before making a commitment. 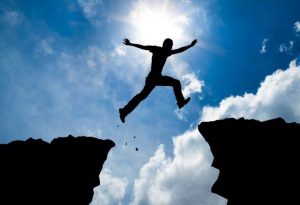 The scientific approach follows the same logic as you have just applied here. As risk increases, so we demand higher levels of benefit and higher levels of evidence of the consistency of that benefit before we are willing to agree that a particular intervention is advantageous. This again is where the rigorous methods of RCTs are valuable given they remove a great deal of bias and provide definitive answers.

However, heavy reliance on RCTs and the desire for black and white answers can have unintended consequences on innovation in health care and in considering complex questions, especially where the risks are low. Just like an adolescent seldom understands the complexities of adult life and insists on black and white responses, so those who insist on RCTs fail to appreciate the benefits of a more nuanced approach to health care and to realise that just because they are good in high risk scenarios does not mean they are always appropriate in lower risk situations..

But what does this mean for the treatment of tongue ties?

While there have been RCT studies regarding tongue ties, they have had significant limitations when compared with the way leading practitioners around the world treat tongue ties today. Because they are so black and white in their findings, they have been able to tell us that there are some benefits to breastfeeding and nipple pain from tongue tie surgery, however the surgery examined is a cut of the anterior webbing of a tie with scissors ignoring the submucosal or posterior structures from which that webbing extends and they tend to examine results for only a week or two.

Therefore, the applicability to the approach taken by most leading practitioners around the world of laser surgery providing a complete release of all elements of a tongue tie, along with the support of a lactation consultant and a manual therapist who help optimise tongue and oral functioning over a period of up to three months, is severely limited.

There are currently efforts to undertake this more comprehensive type of research, especially in the United States, however there are significant ethical considerations that make this type of study problematic. Most directly the issue is that tongue tied infants usually present with some level of feeding difficulty. In order for an RCT to be conducted at the level of rigour that most sceptics would accept, the study would need to have a “no intervention” control group. That is, the researchers (and the infant’s parents) would need to agree not to perform any intervention on a group of infants who cannot feed properly for a period of three months. There may be very high risks of some infants dying in such a scenario, and as such a study designed in this way would never receive ethical approval to proceed even in the highly unlikely event that parents and researchers were willing to take such risks.

The evidence hierarchy exists because scientists understand that not all things can be studied with a randomised control trial. Whether it is for ethical or technical reasons, RCTs have their limits and other studies such as cohort studies and case series have their place too.

So when you next hear an academic or a doctor claim there is no evidence to support the surgical treatment of tongue ties, you’ll know what they really mean is there is no evidence that they will accept. Given the ethical problems of the sort of study they might accept, such a statement says more about them than it does the state of the scientific literature.

Innovation and progression in health care

While research and academic institutions are vital to the education of health practitioners and to the advancement of knowledge, it’s important to remember that clinical experience will always lead research findings. This is simply because a clinician gets immediate feedback as to whether a particular intervention works or not because their patient tells or shows them. Also, researchers will generally begin to investigate those interventions that are gaining traction amongst a clinical community. In the best of worlds, academics and clinicians work together to share experiences and findings in order to explore innovative health care options. While in the worst examples, academics and professional associations name and shame those who seek to innovate and demand they look backwards rather than forward to find the answers patients are searching for.

Remember, what critics call the “fringe” of a profession may just be its leading edge!

The human body is complex, and there are invariably a range of interventions that can help when dysfunction emerges. In the case of the treatment of tongue ties, evidence is mounting that where dysfunction exists, surgical intervention is low risk and with a high degree of benefit. Where the benefit is high and the risk low, it is quite reasonable to proceed on the basis of less definitive evidence because even in the worst-case scenario, there really is no evidence to support the notion that tongue tie surgery leads to worse outcomes. While there is always some risk to a surgical procedure however small, tongue tie surgery provided by a skilled and experienced surgeon, may at worst result in no improvement and at best lead to dramatic improvement in symptoms. At the end of the day it is for patients or their parents to decide whether that is enough evidence for them.